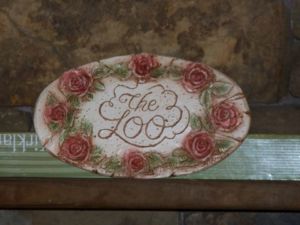 One of the interesting things about traveling overseas is witnessing the strange and somewhat funny things about another’s culture.  Even though Tim and I have lived overseas, we had not yet been to England, where, strangely, the Brits have a fascination with the Loo. What is a “Loo”, you ask?  The Loo is the restroom.  The Water Closet.  De  Toileten ( Deutsch ).  In short, it is …the bathroom.  I found a few funny things in British bathrooms.  Not once did we ever see an auto flush toilet. You must press the flush bar or button. I suppose that is because it just wouldn’t be proper NOT to flush, and every Brit does. It is the proper thing to do!  (And believe me, Brits ARE proper ). No need for the automatic kind of flushers that go off  willy-nilly while you are seated and barely move!  We never saw paper towels  in any of the British bathrooms.  Europeans are very eco-conscious, as a rule, and so wasteful paper being scattered about a bathroom floor would seem, well, wasteful. They have hand dryers in each and every restroom, no paper towels.  In some British bathrooms you must pay to use the facilities. Usually only 50 cents or so, but when you are in a hurry, this is a complete nuisance! In one loo we stopped at in a rest stop, I saw plaques all over the walls that had been framed. They were the Loo – Awards!  This particular bathroom stop had won 3 years in a row for being the most outstanding Loo in England! I must admit, it was efficiently laid out and exceptionally clean.  I wonder who gets the job of inspecting loos around that country?  European bathrooms are notorious for selling all kinds of things in their bathroom vending machines. And I am not talking about the standard feminine products and Tylenol.  The one that took the prize was the one men’s bathroom that sold “True Blue” men’s enhancement pills for around $4 each.  I guess Viagra isn’t regulated in Europe, not in Britain, anyways.  In London you can use the loo and watch everybody around you walking by without being seen behind the one way glass mirror. We didn’t use this particular loo, nor would I want to! 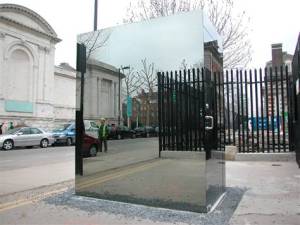 An art exhibit of a usable toilet enclosed in a cube of one-way glass is seen across the road from London’s Tate Britain Museum. The person inside the outhouse can see passersby while remaining invisible to them.

So there you have it, my take on the British potty culture. Just one of the many interesting sites we found along our journey!  🙂

click photo to find where you can get one too!